Alfonso Bavieri: “The winning triad to have a good ham? Pork leg, salt and time. And absolutely nothing else”.

The Products of D.O.P

Ham, like few other products in the world, is still linked to the cadences imposed by nature to its creatures, by the alternation of the seasons and by the combination of two opposite elements: heat and cold. The authentic Italian ham, which can ripen without preservatives and additives, requires only a little salt, the salt of life, to reach the peak of quality.
The time, the twilight and the air of the hills turn the ham into the king of salami, giving it an intense and rich flavor.
The contribution of people is fundamental, today as then, to make the difference between a good product and an excellent product: only the dexterity of those who can work, the experience gained over the years and the care for details allow to achieve excellence.

Prosciutto of Parma is a product that has been awarded the Protected Designation of Origin (PDO) according to the Italian law no. 26/1990 and the EC Regulation 1107/96 certified by an inspection body authorized by the MIPAAF (Ministry of Agricultural, Food and Forestry Policies).

Prosciutto of Parma is a product that has been awarded the Protected Designation of Origin (PDO) according to the Italian law no. 26/1990 and the EC Regulation 1107/96 certified by an inspection body authorized by the MIPAAF (Ministry of Agricultural, Food and Forestry Policies).

The specific characteristics of Parma Prosciutto, when ripened (minimum 12 months) are :

The processing of Parma Prosciutto takes place only in factories located in the typical production area. It is bounded by the course of the River Enza and, to the west, by the River Stirone, in a microclimate characterized by a mixture of sea breeze conveyed in this strip of land through the Apennines. These environmental characteristics have a decisive role – together with the traditional processing system and the professional and human factors – in achieving the final characteristics of the product.

Prosciutto of Modena is a product that has been awarded the Protected Designation of Origin (PDO) according to the Italian law no. 26/1990 and the EC Regulation 1107/96 certified by an inspection body authorized by the MIPAAF (Ministry of Agricultural, Food and Forestry Policies).

Prosciutto of Modena is a product registered as a Protected Designation of Origin (PDO) according to the Italian Law No. 11/1990 and Regulation EC 1107/96 certified by inspection bodies authorized by MIPAAF (Ministry of Agriculture, Food and Forestry).

The specific characteristics of Prosciutto of Modena, when matured (minimum 14 months) are:

The processing of Modena Prosciutto takes place only in factories located in the typical production area. It corresponds to the hilly area surrounding the gold-hydrographic basin of the river Panaro and the confluent valleys. In this area, thanks to an ideal microclimate for the maturing of hams, an ancient tradition of cured meat has been rooted; the combination of these two elements still today, with the help of modern technologies, allows the achievement of high quality standards in the production of Prosciutto of Modena D.O.P. 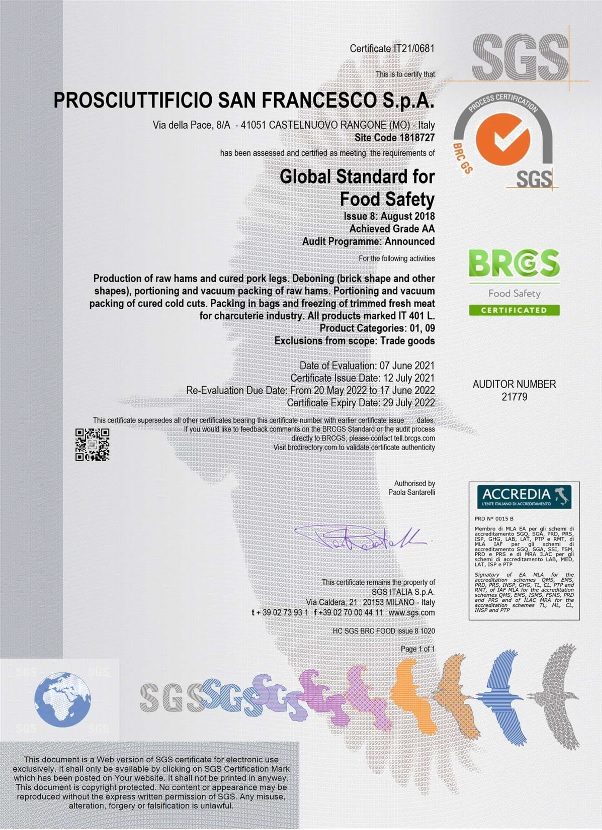 Since the mid-2000s, in order to standardize the qualification of suppliers in the field of “food”, large-scale distribution, especially foreign, has created regulated rules, which have resulted in the following voluntary certifications of companies:

Since the end of 2007 Prosciuttificio San Francesco Spa (PSF) has undertaken the path of quality certification, obtaining, for the first time in June 2008, the above-mentioned certifications, at the highest level for both. Since then, every year, it is subjected to an audit (audit) by a third (external) certifying body, which at the end of the verification (which now lasts 3 days) if all the required requirements are met, issues the updated certification.

These voluntary requirements, over the years, have been intertwined with the provisions of existing community legislation on food safety and good processing practices, in order to meet the ever increasing demand for uniform European standards and to be able to remain on the lists of approved establishments authorized for exports to third countries. One of the latest updates introduced concerns “food fraud” following numerous violations on the veracity of food placed on the market.

In addition, PSF has two PDO factories, namely Prosciutto of Modena PDO at the Castelnuovo Rangone factory and Prosciutto of Parma PDO, near Medesano (PR). Both productions follow the specifications drawn up by the consortia that follow their production and that establish the rules to be followed from the feeding to be administered to pigs. At each stage of this production the inspectors of a responsible certifying body (IFCQ) check that all the principles have been respected and that the accompanying documentation is also correct. The legs of the PDO circuit that are purchased for the production of the two PDOs are marked with “PP” on the rind and must have both organoleptic and physical chemical characteristics (fat layer, lean mass, weight…). The registration of purchases, number, weight, supplier and farms of origin, is made both on a portal to which inspectors can access, and on the paper register of the PDO, which will serve as a record of loading and unloading.

At the end of the checks and the ripening determined period (12 months for PARMA and 14 months for MODENA) is ensured by the inspectors with the fire mark in their possession the distinctive logo of the PDO (a ducal crown with under the acronym “R21” that distinguishes the production of Parma, and “Pm93” that instead is for Modena) on the ham rind, definitively giving it the qualification of PDO ham.

The product is also physically sampled annually to verify compliance with the analytical requirements imposed by the specification. 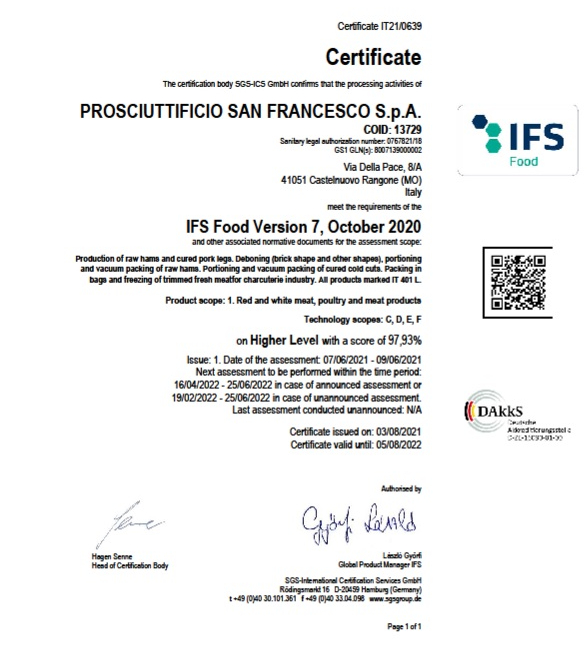 Page load link
This site or the third-party tools used by this make use of cookies necessary for the operation and useful for the purposes described in the cookie policy . If you want to learn more or opt out of all or some cookies, consult the cookie policy. Ok
This site is registered on wpml.org as a development site.
Go to Top